As each year a number of interesting panels took place during SSP, open for a broader audience. Two events that took place are the traditional A.C. Clarke panel and a presentation of the Breakthrough Foundation. 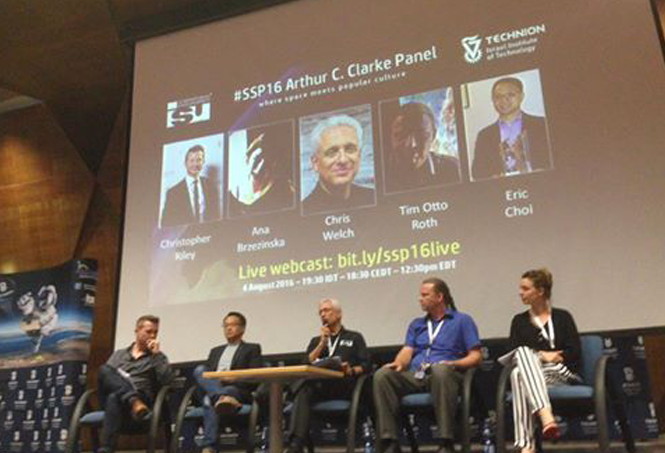 In memory of ISU’s first chancellor, the scientist and science fiction writer Arthur C. Clarke, ISU organizes each year a panel focusing on the intersection of space and popular culture, in the same way that Arthur Clarke’s works popularized space to the general public. From books to Hollywood films, from social media to music, space themes can be found everywhere. This panel invites individuals from all areas of art to share how space has inspired their creations, and how their work may inspire what we may do one day in space, and how STEM may soon be replaced by STEAM (Science,Technology, Engineering, Art and Mathematics).
This year panelists at SSP16 were Chris Riley, Science Writer and Filmmaker; Ana Brzezinska, Filmmaker and Audiovisual Producer; Tim Otto Roth, Artist and ISU alumnus Eric Choi, Aerospace Engineer and Science Fiction Writer.

The panel was moderated by Prof. Chris Welch, Director of the ISU Master program.

Breakthrough Foundation: Search for the origin of Life

In 2015 the visionary entrepreneur Yuri Milner, Stephen Hawking and Lord Martin Rees announced a set of initiatives — a scientific programme aimed at finding evidence of technological life beyond Earth. These are the first of several privately-funded global initiatives to answer the fundamental science questions surrounding the origin, extent and nature of life in the universe. The Breakthrough Initiatives are managed by the Breakthrough Prize Foundation.
A presentation on this initiative was given by Dr. Simon ‘Pete’ Worden, CEO of this Foundation.

Pete Worden has been since a long time a strong supporter of ISU and provided several lectures. In his previous post as NASA Ames director, he was also very instrumental in organizing SSP09 in California. Recently, he has been appointed as member of the Board of trustees of ISU.

A number of other interesting events, such as the traditional rocket launch, are planned during SSP16.