Kibbutz Ga'led, 19 August 2016, by John Connolly, SSP Director - Fridays are typically the first day of the weekend in Israel, but Friday August 19th was a work day for International Space University’s rocket scientists.  Four-person teams from the SSP Engineering department were each challenged to design, construct and fly a mid-power rocket that satisfied a specific set of requirements, and teams worked into the early hours of launch day to complete their unique – and experimental – rockets.

This year’s launch site was a kibbutz southeast of Haifa that has been in existence since 1945.  Gal‘ed is home to 400+ Israelis who live in a collective community, and on this morning they welcomed 100+ ISU participants, staff and faculty to their land.  A large white tent was in place to provide shade, couches and tables provided a comfortable environment to watch the launches, and generous breakfast buffets – complete with artistic baristas – provided breakfast for the early morning crowd.  This is the way all rocket launches should be catered!

Two hundred meters away, Israeli rocketry expert and educator Thomas Goodman had set up his launch system.  Every ISU rocket launch requires the help of a local expert who is familiar with the rocketry rules of our host country and who can assist with our rocket workshops, and Thomas was that person this year.  He not only generously volunteered his time to help with the rocket construction workshop, but also provided the launch system, rocket motors, AND served as launch safety officer.  Thomas embodied everything great in an Israeli educator! 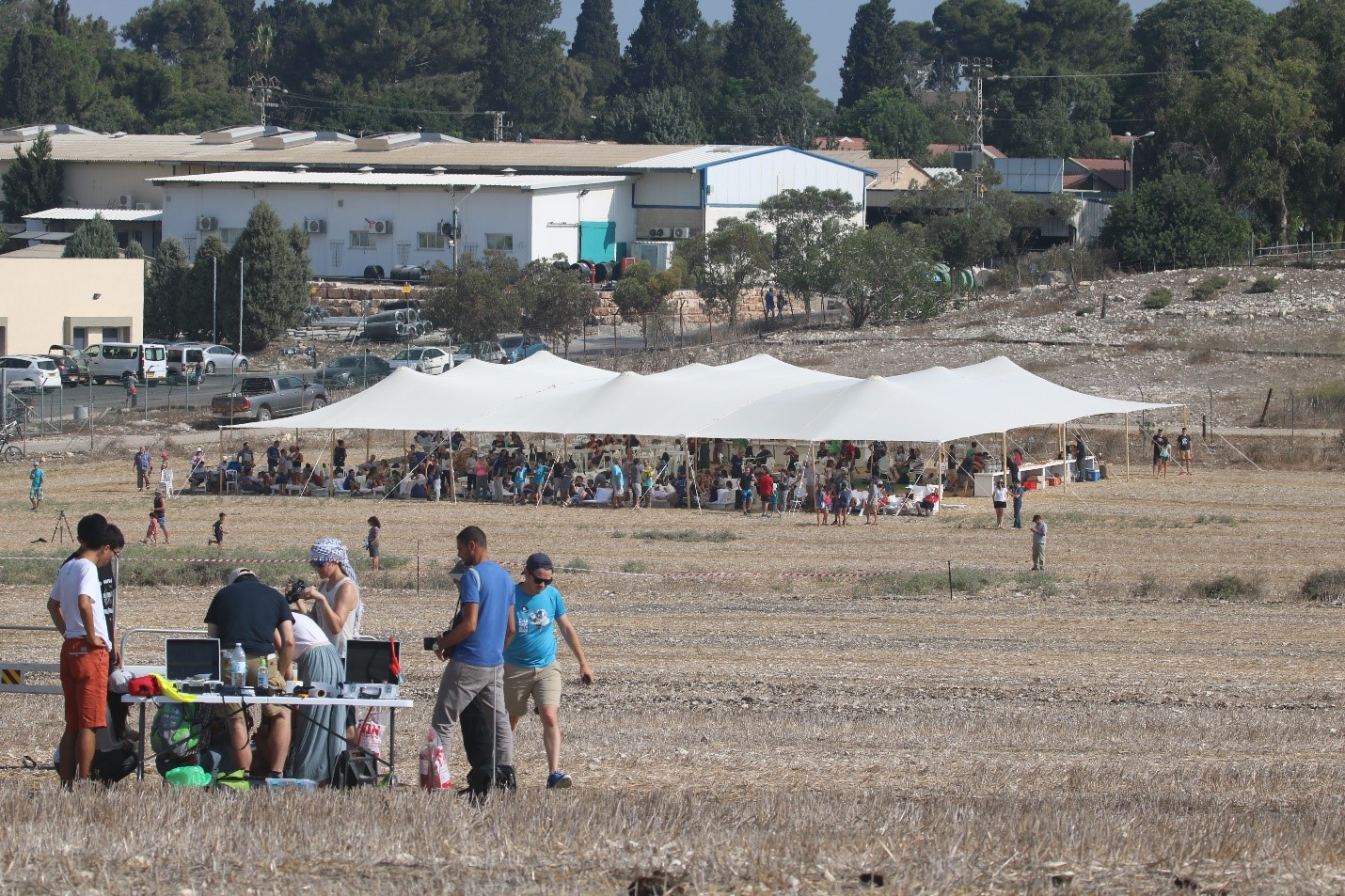 As the SSP participants began to arrive with their rockets, they were put on display in the “preparation tent” where many of the invited guests and LOTS of the local kids got a good look at the rockets and had a chance to talk to the ISU rocket scientists.

While the ISU rockets were being prepared for launch, dozens of schoolchildren built and flew air powered rockets, and others flew impressive water-powered rockets to 100+ meters! 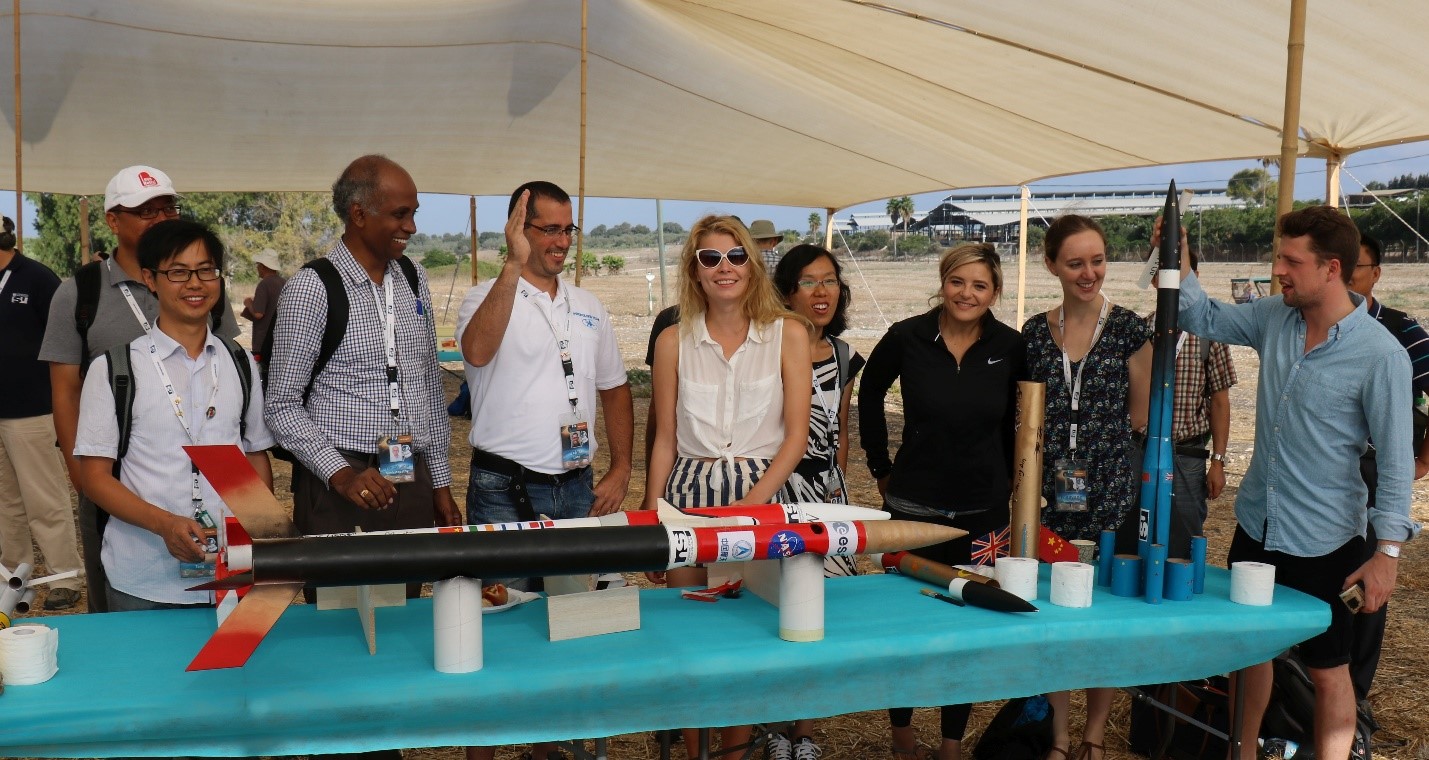 Launches were scheduled to begin at 8 am, and shortly after that, the first team carried its rocket to the launch pad.  Thomas installed the rocket motors – each rocket was required to be propelled by a single G80-7T composite propellant motor that produced a thrust of approximately 100 Newtons – and the teams loaded their rockets onto the launch pads.  After a final team photo with their rocket, the pad area was cleared and final electrical connections made to the ignition system. 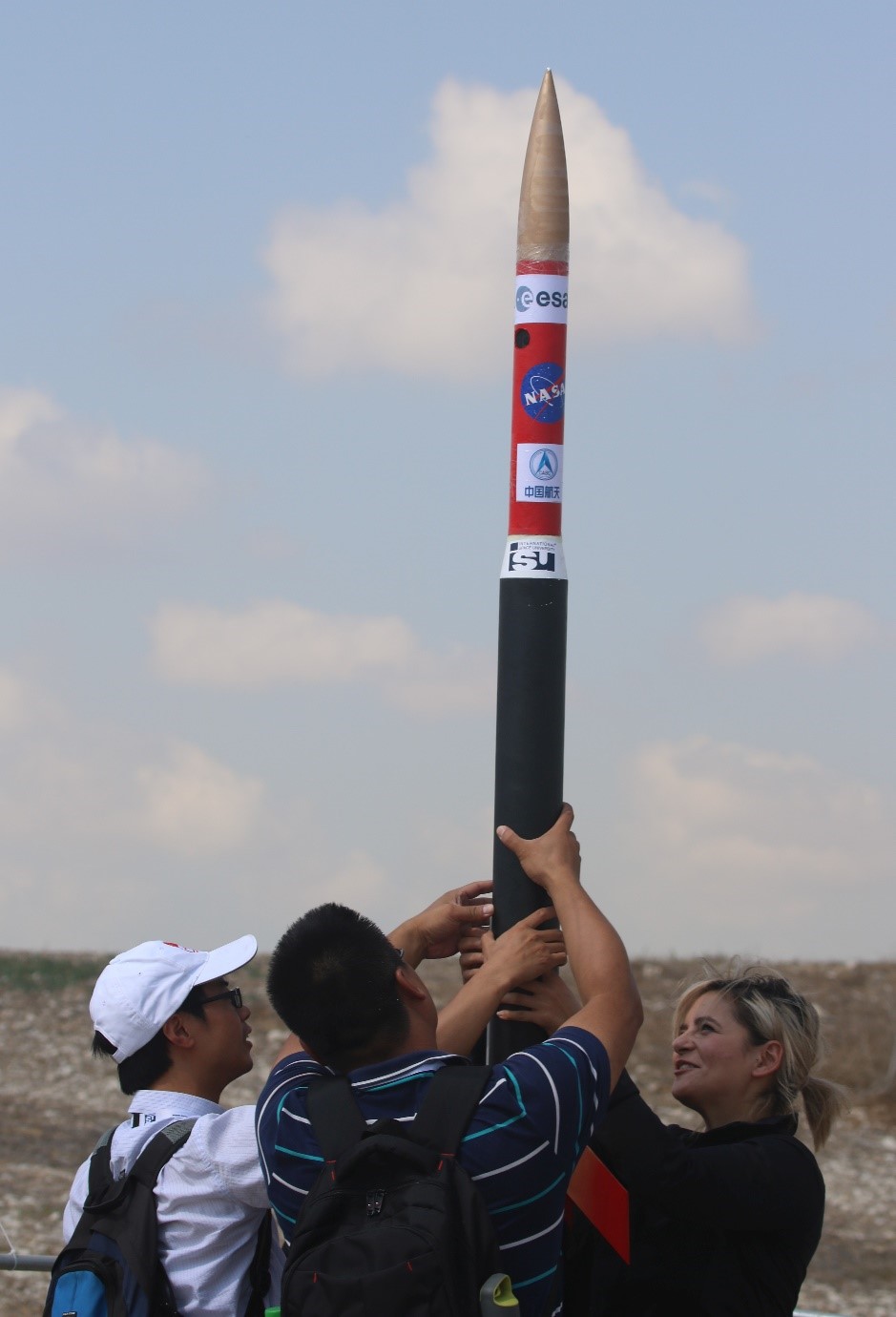 SSP Director John Connolly served as the launch director and handled PAO duties.  After receiving a “green” status from Thomas at the launch pad, Connolly led the assembled crowd in the countdown, and at T-0 each of the rockets leapt into the air.

The requirements for this year’s launch were for the rocket to come as close as possible to a flight altitude of 300 meters, carry a device for recording audio and video of the flight, carry a fragile glass bottle of Israeli olive oil, and a stone from the Dead Sea.  And return safely!  An additional requirement was for the rockets to have a somewhat complex shape – either changing body tube diameters, multiple body tubes, or other interesting design components. 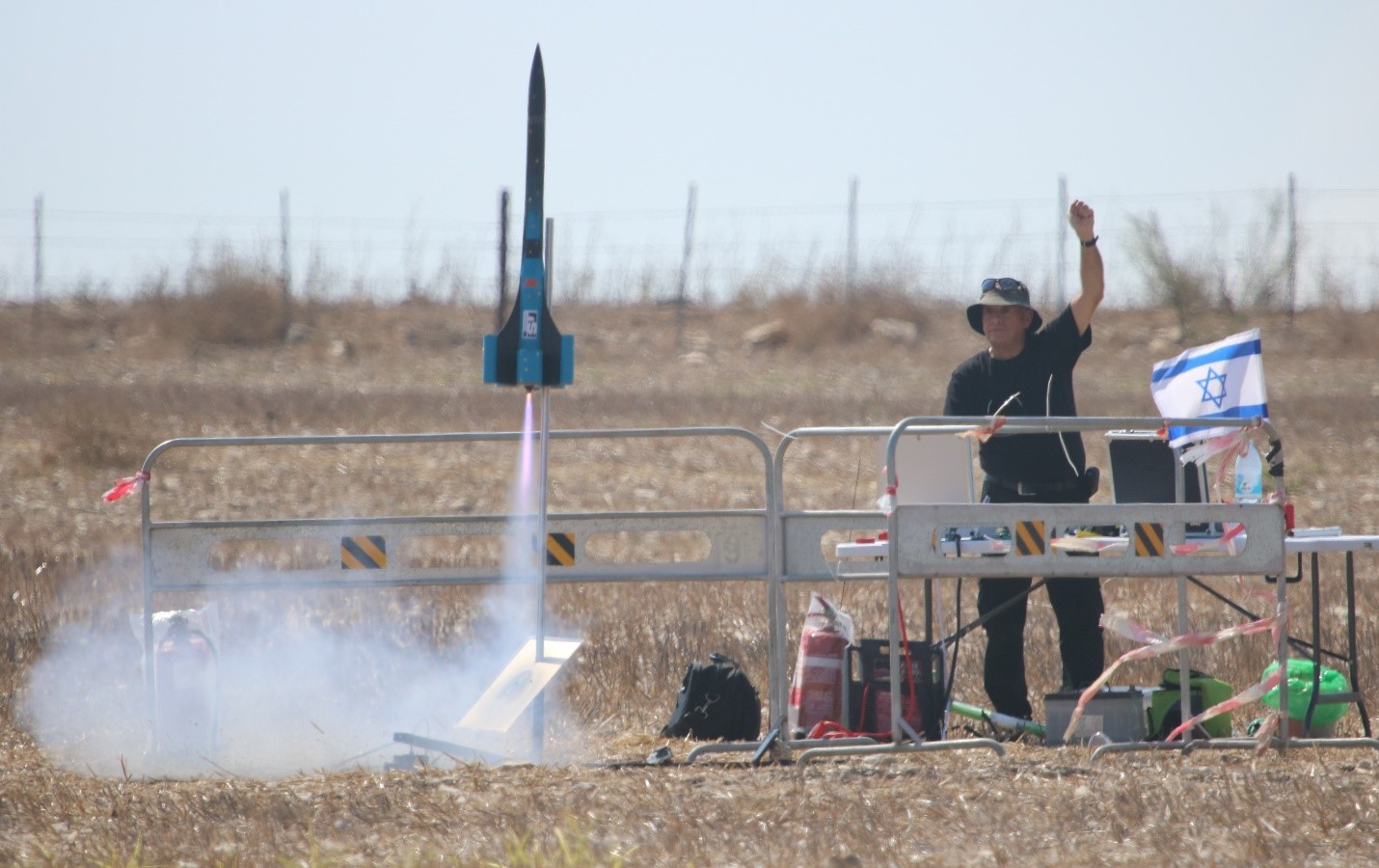 All of the rockets flew well – onboard altimeters would later report that several came within meters of the target altitude – but not all recovery systems deployed.  At least two of the rockets had issues with their parachutes deploying, and returned to Earth at higher-than-desired velocities.

The final rocket flown was a staff-designed rocket that (theoretically) bore some resemblance to the Calatrava obelisk that sits at the center of the Technion campus.  And it had koala bears hanging on to each fin (?!). 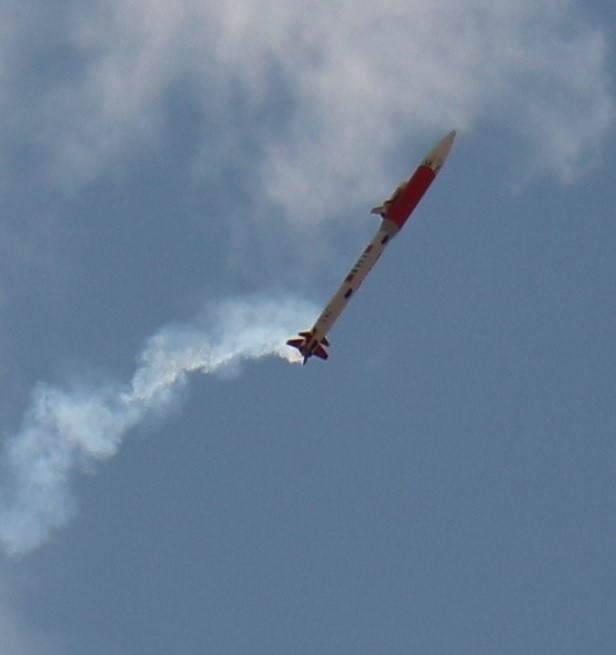 All rockets were safely recovered, and after checking payloads and altimeter data, the “Stellar”rocket designed and constructed by Maayane Soumagnac (France), Adam McSweeney (UK) , Zhaohui Qin (China), and Dina Begun (Israel) earned the first place prize, attaining an altitude of 312 meters and safely returning its payloads.  In addition to the prizes given to the winning team, a second rocket that resembled a flying pencil named “ZELE” was given an award for Best Looking Rocket. 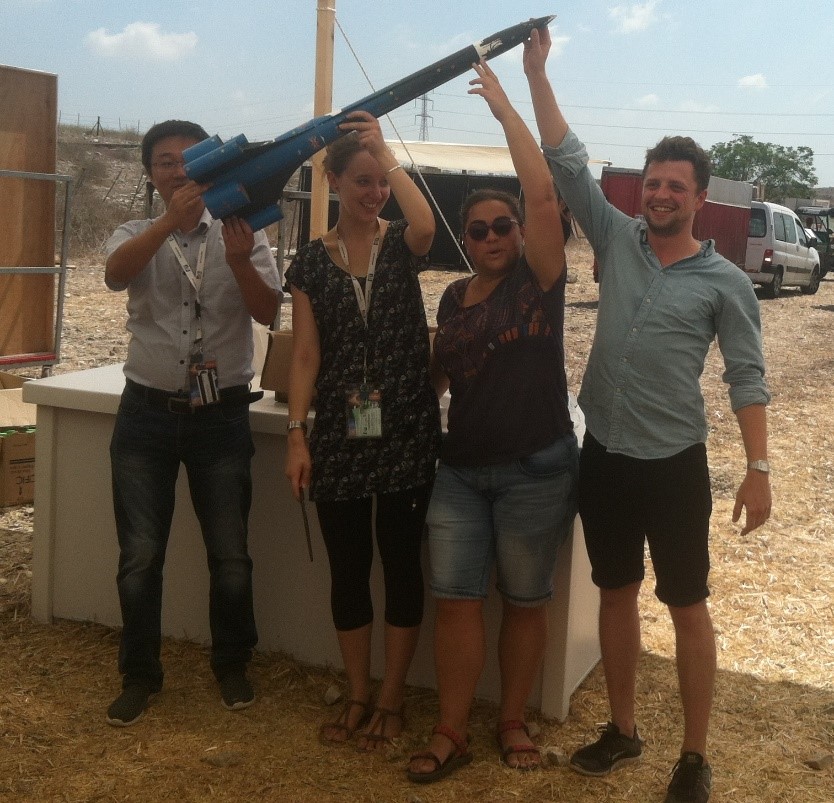 An excellent highlight video of the launch can be seen at:  https://youtu.be/XBo4kK5-nsM  Thanks to Goktug for the great video editing!

Following the launch, we were treated to a great lunch and kibbutz hospitality in the community dining hall.  Our great thanks to our kibbutz hosts Sivan for all the planning and preparations and Eviatar (who works at the Asher Space Research Institute) for inviting us to “Spaceport Gal’ed”!