As part of a tour in Israel, sponsored by a number of Israeli organizations including ELAL, the recently appointed ISU Chancellor and Apollo astronaut Buzz Aldrin visited ISU’s Space Studies Program hosted by Technion, Haifa on 26 July 2016. Each year, ISU honors the memory of one of its greatest supporters, Dr. Gerald Soffen with a lecture featuring a prominent visionary in the space sector. Few are more visionary than ISU’s Chancellor, Dr. ‘Buzz’ Aldrin! 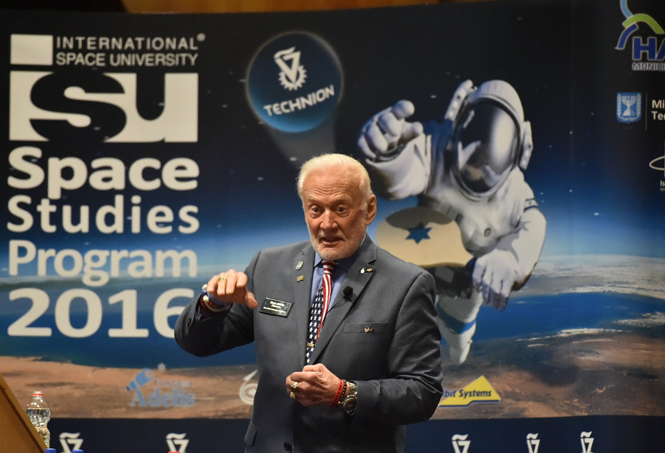 He was accompanied by Dr. A. Aldrin, himself an SSP01 alumnus.
This event obviously attracted a large audience of the general public and was well attended in a completely filled room in Haifa. This public attraction was evident knowing that dr. Aldrin was one of the first people putting a foot on the Moon on 20 July 1969, after he participated in the Gemini program.
Now, 47 years later, Aldrin is sharing his vision for establishing a permanent human presence on Mars. And summarized as follows - "Get your a** to Mars!", dr. Aldrin declared to the starstruck crowd as he kicked an imaginary posterior into gear.
"These five words I've been telling everyone on planet Earth," dr. Aldrin passionately announced in a slightly gravelly voice. "Let’s go for it!"
"It is not just rocket fuel that will get us there," he said. "It's human spirit—having your country behind you, and a coalition of countries."
"No other task can unite the nations of the world like this could, and should."

At this occasion, and in his function as Chancellor of ISU, dr. Aldrin took the opportunity to sign the certificates and diplomas of the ISU participants and students of this academic year.